Nikola Fichev (also known as Kolyu Ficheto) is Bulgaria’s recognized master architect. He began his building and interest in architecture at a young age, it is believed that he was self taught with the basics of of  architecture, involving drafting and arithmetic. He was one of the most creative architect of the 19th century.  It has been recorded that he was fluent in several languages; Turkish, Greek, Romanian, Serbian.

I provided a small snippet of information regarding this great master builder.  What I want to point the focus on, is the icon used in the 2,000 Bulgaria Banknote (Leva).  It is not the conventional square and compass mostly noted on free masonry.  It is implied, that as an Architect and builder, he used those tools for the profession.  But, I believe this is more of a signal, or homage to free masonry.

Whether it was the Banknote designer that came up with this icon, or the man depicted in it, the message is there.  All Freemasons are in unanimity as to what this symbol means to them within their fraternity.

There are many banknotes that show freemasonry symbols, including the the US 1 Dollar bill.   Have you seen a banknote that shows some of the oldest secret societies?  The most common and open (not so secret) one is Free Masonry.

I’m curious to know your experience in banknotes that show symbols that are obscure.  I welcome your comments, you can go to our discussion forum to start a topic. 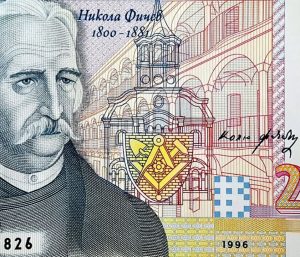 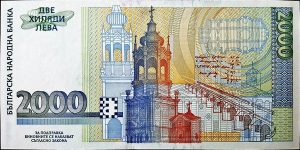