Iraq, home of famous Babylon city in ancient times was a “mecca” for the beginnings of many beliefs, folklore and deities.  Its roots stands from biblical time, even as far back as the book of Genesis from the Torah, or Old Testament from Christian bibles.   As recorded in that book, the tower of babel was built, King Nimrod ruled, and different languages were first present.

The picture in this Iraq 10 Dinar banknote depicts a person and later a deity.   Sargon, was a ruler of the Akkadian Empire (about 3,000 BC).  There are some similarities when showing the historical face of a Sargon with the braided beard, and with Lamassu; half human, half bull, half winged beast.  Also, is worth mentioning the King Ashurnasirpal of ancient Syria (or Assyria), were Lamassu statues were erected to symbolize power.

A hybrid of human and animal, this icon and deity has its beginnings in mysticism.  The other character depicted in the banknote, is a winged spirit that blesses either the king or royal palace, the object shown is a pine-cone.

Ancient times Israelites were persuaded by icons, symbolism of past cultures, and also came across the Lamassu. The prophet Ezekiel mentions in a way this deity, describing it as a great being made of a lion, an eagle, a bull, and a human.

Furthermore, it is likely that the Lamassu was one of the reasons why people started to use a lion in latter depictions of it, not only as a symbolic image of  bravery and strength, but also as a defender. 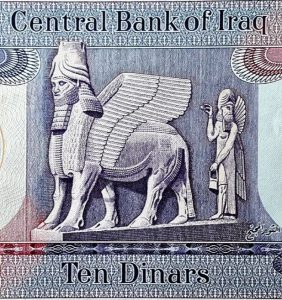 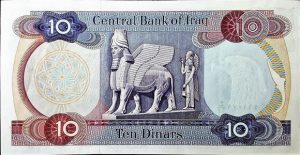 My research on icons is minimal, but love researching on topics of icons in banknotes.  I have other banknotes from Syria, Iran and other middle east countries that has some iconic symbols. I will share my research on them in future posts.

I’m curious to know your experience in banknotes that show symbols or icons.  I welcome your comments, you can go to our discussion forum to start a topic.