Icons in banknotes are not often regarded. I’m not talking the easily recognizable icons that a banknote can hold, but the obscure ones, you know the ones that are not much information on.

I would like to first begin with the definition of icons. Merriam-Webster dictionary defines the word Icon as a sign (such as a word or graphic symbol) whose form suggests its meaning.

Take a look at the Colombian Peso (see screenshot below) 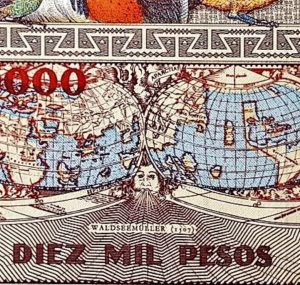 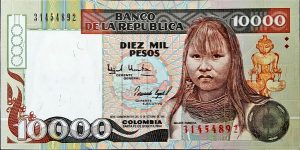 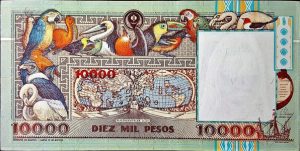 The Colombia 10,000 Pesos banknote, shows some would say it is an angel, or perhaps a god.  But, looking deeper, it gives a clue, it shows “Waldseemuller” inprinted.

The name is Martin Waldseemüller, to be exact. He was a cartographer (person who charts maps) in the 1,500’s, the ripe age of the renaissance era.   He made the legendary Universalis Cosmographia, which is a printed wall map of the world.  He charted the first map depicting America, but not the America (as in United States) you now know, but it was South America on the main map and Colombia was considered the “America” of its time.

I placed a little of history of the author of the Universalis Cosmographia.  But, what I wanted to show mostly was the wind blowing pagan icon.  This picture can represent any god that breathes or exhales life, as in blowing life or destroying it.   The figure in the the map’s example is not explained,  I couldn’t find a good resource showing who this icon was or is.  But, doing a deeper research, it resulted in a greek mythology deity,  Aeolus.  In the renaissance era, God and gods were generally believed by the masses, specially coming out of the middle ages, or referred to as dark ages.

Have you seen any type of mythological or pagan god?  or perhaps some type of spiritual icon that you want to explore and share information of?  You can do so by visiting our Best of Banknotes forum, a place where you can share your knowledge and discuss with other enthusiasts.