The widely recognized Lorraine Cross is a Cross with an upper bar and mid section bar, symobolically similar to the crucifixion cross (or Latin cross) as it is known. Normally, this cross is without a corpus (no body affixed to it). This cross is also a symbolical form of a patriarchy. 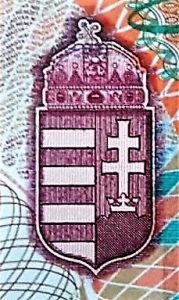 King Stephen I, who reigned from 997 – 1038 is said to have adopted this symbolic cross as he adopted Christianity and allowed it as the state religion.  Also, St. Stephen is the revered as Hungary’s patron saint.

The origins of Lorraine Cross is a bit obscure, but few researches show that it started in France, as Cross of Anjou.  As far as taking this name, King Lothaire named a province in the northeast of France after his name. The name ‘Lothaire’ evolved over the years to ‘Lorraine’.  The Knights Templar used this cross as their emblem, granted to them for their use by the Patriarch of Jerusalem, for the Crusades.

The most notable countries using this cross in their coat of arms is Hungary and Slovakia.  Below is a beautiful banknote from Hungary commemorating the millennium.

Do you know of any great person, people or icon(s) that are depicted in banknotes?  Do you want to share your findings and knowledge of?  You can share what you know and discuss by going into our discussion forum,or you can comment down below.