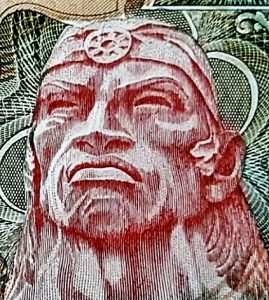 Rumiñahui was Atahualpa’s general stationed in Quito (Ecuador’s capital).  While the rule on Inca empire extended from parts of Perú,  to Ecuador and to some parts of the Andes (mountainous landscape that covers Colombia, Ecuador, Perú, Bolivia, Chile),  the main post was on Quito.

Atahualpa, was an Inca emperor that ruled in early 1500’s till his death about 1533 in Cajamarca (Perú).  He was captured and held prisoner by Francisco Pizarro a Spaniard Conquistador, who demanded a ransom for his release.

In this period of time is where Rumiñahui comes to play.  He was the general, believed to gather all the gold and silver necessary for Atahualpa’s release in Cajamarca.  Also, historians showed the he led the resistance against the Spaniards in the northern area (Ecuador) of the Inca Empire.

After the Spaniards killed Atahualpa, Rumiñahui returned to Quito, the treasure he had gathered (a/k/a treasure of the Llanganatis ) was believed to be buried in the mountain snow of the Andes.

Into this history, came another conquistador named Sebastián de Benalcázar, he headed to Quito, to recover this ransom treasure. The forces of Rumiñahui and Benalcázar met at the Battle of Mount Chimborazo, where Rumiñahui was defeated. But, the spaniards never recovered this buried and hidden treasure.

Ecuador shows a depiction of Rumiñahui in the old 1,000 Sucres, see images below.

Do you know of any type of great people that are depicted in banknotes?  Do you want to share your findings and knowledge of?  You can share what you know and discuss by going into our discussion forum.